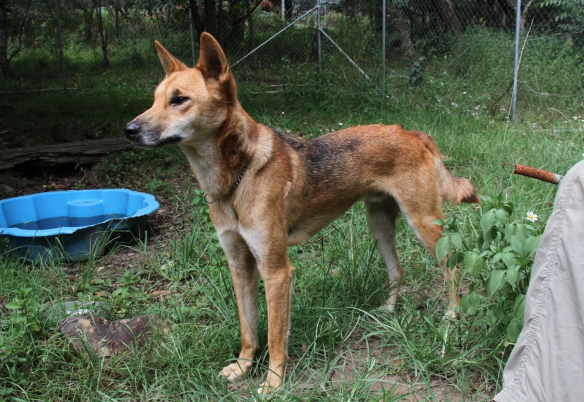 This is Dawa the dingo. His name means ‘little brother’ in Gumbaynggirr and he lives with a lovely lady in the hills to the west of here. Dawa is emblematic of the scourge of livestock farming in the area and a lot of farmers would like to see him, and his friends, disappear. But to me he’s fascinating. Apparently he was rescued as a pup after his mother was killed and now he lives on a remote property with another dingo, a dog-dingo, and a couple of horses. I found him fascinating because he’s so different from a domestic dog. When I went in the enclosure with him, he was wary of me but otherwise not interested in me in the way a domestic dog would normally be. He didn’t wag his tail or fold down his ears or even come to sniff me. In this way he’s like a traumatised dog except without the psychological issues; he’s just not that interested in people other than as potential threats. In fact he reminds me a lot of a hyena in the way he’s so self-contained. But he also responds to a bit of human guidance. Looking at him taking some instructions from his human carer and at the same time  maintaining his independence made me feel like I was looking through a window through time at the early stages of dog domestication. Nobody knows when or how this process happened but a few folks speculate that it was helped along by humans taking young pups from the wild and habituating them to human society.  At it’s core though must have been some level of understanding that allowed people and dogs to get in each others’ heads. Some people say that their dogs know what they’re thinking even before they know it themselves. Watching Dawa, I suspect that the dogs from way back in the early stages of domestication first had to actually care to know.

2 thoughts on “Do dingoes care about us?”