Ever wondered what chicken farming would be like if the chickens were six feet tall?  Emu farming comes close, only the birds have sharper claws and they don’t all scatter when you walk among them. They close in on you. Right now I’m in Marburg, Queensland to look at the particulars of emu farming and the directions that these processes are taking these birds. Is this a process of domestication or is this just the keeping of wild birds in captivity? That’s my guiding question at the moment and I’m keeping my eyes and ears open for signs that emu farming might be changing these bird populations along the lines of traditional domestication. But this is where it gets complicated. At birth emus are like many birds in that they imprint on whosoever gives them a lot of attention. So farmer Steve has to be sure to leave hatchlings well alone otherwise they imprint on humans and this causes a lot of problems down the track. Not least is that they try to mate with the human staff. So in this sense we could say that it’s essential to maintain a sort of wildness in them so that they’ll be more likely to mate with other emus rather than farmer Steve. But at the same time they can’t be too wild as some tend to get very aggressive and attack humans entering into the enclosures. These agro birds usually get removed to the ‘meat and feathers’ only paddock and are effectively out of the gene pool. But what about tame birds? Perhaps these birds are first to the feeders when farmer Steve fills them up, giving these birds a bit of an advantage over the others. Probably someone with time on their hands would be able to determine that but time I don’t have. Still, I really do think that there must be some sort of change going in the genetic makeup of the farmed emus and this is complexly woven into their developmental processes. Unsurprisingly it’s complicated. I also wonder about the wild populations if emus become domesticated. This is because a few other species that humans have domesticated – aurochsen and horses – disappeared from the wild. Some might call it extinction but on the other hand you could look at it as these animals carving out a new niche whereby they thrive in numbers far greater than their wild ancestors. And this brings me to crocodiles. The farming of these creatures has been said to be the way to save the species. I’m off to Rockhampton next to see how farming crocodiles might not just save, but alter the species.

Those sharp claws make for hazardous farming at times. Especially as emus show almost no fear of humans. See above. 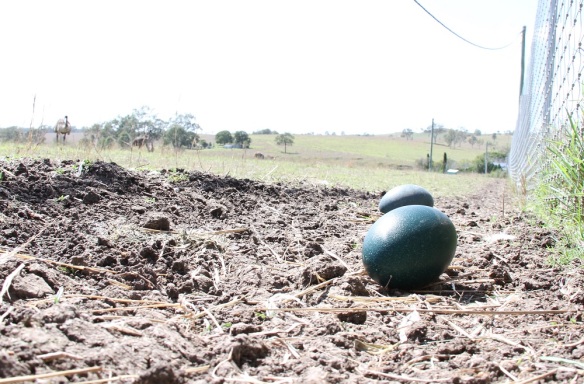 Emu eggs are very heavy, dark green, and taste like egg. Interestingly the emus lay them beside the fences  and (to my great relief) don’t defend the eggs when you collect them.

2 thoughts on “Wingless birds of change”