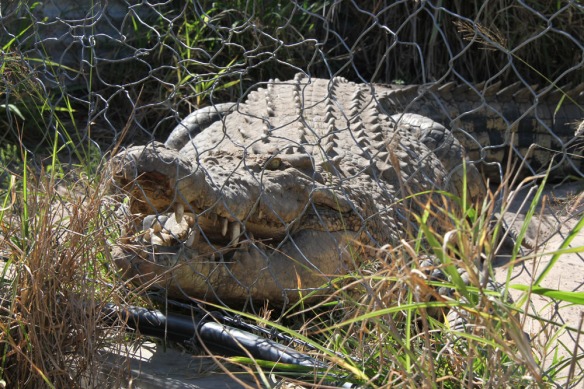 Rock Steady patiently waiting for his lunch (and thinking that I might be it). Note the state of the wire fence from Rock Steady pulling on the mesh

Just north of Rockhampton at the end of a dirt road and across a causeway onto an island of sorts is an unusual sort of farm. This is Koorana Crocodile Farm, the first of its kind to be established in Queensland and probably the most well-known, not least because of a reality TV series called croc college.  The farm is the result of a lifetime’s work and passion of John Lever who previously worked on conservation, management and farming crocs in Papua new Guinea. John established Koorana out of a passion for crocodiles and strategic conservation, which is essentially giving people a reason to conserve something by making it valuable in some way.

Crocs are made valuable because people like to wear their skins on their feet and  hanging by a strap over their shoulders. The skins fetch a hefty price in the fashion industry and more so if they have a brand name stuck on somewhere. There’s also crocodile meat and the fascination of crocs to tourists but the skins are what makes it viable to establish a crocodile farm. They grow and mature far too slowly to be profitable in terms of meat production.

This slow growth rate and maturation are things that make crocodile farming a challenge but also things that make me wonder about the kinds of selection that are happening. In speaking with John, I bring up the subject and right away he understands what I’m getting at. John is in business and he needs to find the optimum way of making his business successful and this involves getting the most out of his crocs. This is partly why he established his farm so far south. You see during the winter, outside of breeding season, teh crocs slow down and require very little food. In fact the ideal is to breed them here in central Queensland and raise them further north where they can grow faster.

One thing that is deliberately selected for is fecundity. Females who lay lots of eggs pass this characteristic on to their progeny so these females are favoured as breeders. So to males who breed more effectively are favoured. But behaviours also figure in selection of crocs for breeding. For example a bullish male who beats up on, or chases away females is not going to last long at Koorana. He’ll more than likely be sold off to a zoo and soon be out of the breeding stock, while more peaceful males who can get along with females will be favoured. As one staff member said, we want lovers not fighters. I don’t imagine that this will result in a population of doe-eyed docile crocs, at least not in my lifetime, but I don’t doubt that this is a selection for tameness.

At the same time there’s selection for rapid growth rate. This is crucial because the faster that crocs grow, the less food they need to consume before they are killed and skinned. But this makes things complicated because it might be the case that there are linkages between growth rate which is selected for, and aggressiveness, which is selected against. It will be interesting to see which characteristic is more important and which needs to be accommodated to favour the other.

Then there’s scales. This is interesting because now we’re getting into the kind of selection that produces morphological changes. In the crocodile industry the more rows of belly scales, the finer the skin. In which case crocs which produce extra rows of scales – and this trait is heritable – are positively selected. So looking down the track we might imagine that the crocs being farmed will be quite different from their wild cousins. They should be more placid, faster growing, and with folds of skin on their bellies with countless rows of very fine scales. In the next post I’ll talk about how they might also have different responses to people.

2 thoughts on “Economy of Scales”