In the last post I talked about the bits of the brain that (normally) cooperate to make the rest of our bodies react fearfully to things like snakes. I highlighted the thalamus-amygdala pairing and how one send information to the other in advance of our conscious knowledge of whatever it is we’re reacting fearfully to. But in the end we do get to process the fear-relevant information and take control of our fear response, don’t we? Well, that depends on who this ‘we’ is that I’m referring to. If ‘we’ is the small percentage of the population who have brain injuries that cut the connection between the thalamus and the visual cortex, then think again. Or don’t think as the case may be, because what the eyes perceive will never reach the part of the brain that thinks about things that the eyes perceive. But that’s not to say it won’t be acted upon.

Here again is the picture of the see-through head that I used in the last post just to make this easier to follow: 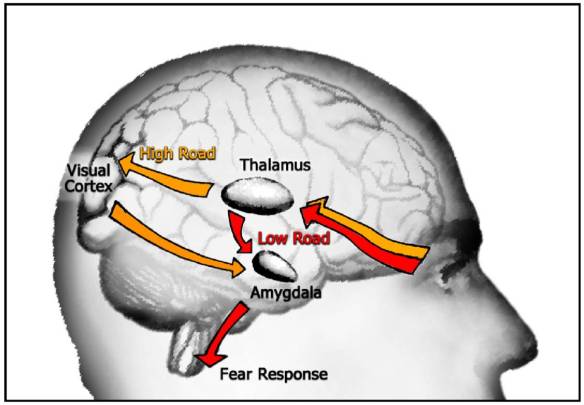 As you can see there are two pathways along which fear-relevant visual stimuli travel. Both go through the thalamus and amygdala but only one pathway goes through the visual cortex for conscious processing. So in cases where the pathway from the thalamus to the visual cortex is damaged, we should still expect the visual information to reach the amygdala, right? After all the eyes are good, the thalamus and amygdala are fine and the pathway isn’t damaged. Well, it just so happens that the information does travel the low road intact and this folks, is called blindsight.

There’s someone who is famous in cognitive neuroscience although I don’t know his name. All I know is that his initials are G.Y. and he’s probably English. G.Y. is famous because he straddles the line between those who are cortically blind and those who can see normally. Following a car accident he suffered damage to only the right hemifield of his visual cortex, meaning that he is only  ‘bind in one eye’ although technically both his eyes can see. Consequently G.Y. is much sought after by cognitive neuroscientists because he is a test case and a control all in the one neat package.

In one experiment G.Y was shown images of male and female faces with fearful and happy expressions. These were shown separately to his left and right hemifields and he was required to push a button to identify whether the face was male or female. Throughout the trial G.Y. denied visual perception of anything presented to his right visual field, but still reported the feeling that ‘something happened’ when he was presented with the images. Something certainly did happen. In fact he correctly identified the sex of faces presented to his right (blind) side more than he did those presented to his left side – 76% compared to 63%.

In the second experiment G.Y. was presented with pictures of males and females with happy or angry faces and the angry female faces presented to his left visual field were accompanied with a loud noise – an unconditioned stimulus. The expectation was that the  angry female faces would elicit a fear response in his right (blind) hemifield because they should be associated with an aversive stimulus. But anyone who is human should know not to expect brains to act predictably. In contrast to the first experiment G.Y. identified the female faces presented to his right hemifield only 34% of the time. In fact he was significantly more likely to identify an ‘unseen’ aversively conditioned face as male. We can only guess what is going on although the fMRI showed the amygdala firing on all cylinders while G.Y. was shown the angry faces indicating a fear response. There was also activity in the superior colliculus and our old friend the thalamus indicating that some subconscious decision making was going on. So it looks like the bits of the brain that decide what is fearful and how to act make assumptions based on the nature of the stimuli. In fearful faces they seem to identify sex quite easily but with angry faces they seem to assume that if an angry person is making them fearful it must be a male. On balance it’s a pretty wise assumption.